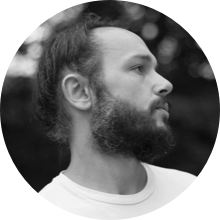 During his earliest childhood, Malik Heilmann has been surrounded by the imagery of Soviet propaganda. He paints and draws the illustrations from textbooks, newspapers and documents, which influence him greatly in his later work. The oriental and Russian fairy tales and myths have always fascinated him and inspired his imagination creatively.

After moving from Uzbekistan to Germany, Heilmann developed new painting techniques self-taught and had a strong presence in the street art scene.

Starting from the search for identity and nationality, he artistically deals with the human being and his multi-faceted being at the end of his graphic design and painting studies. The original, mysterious and unfathomable human being and the subject of masculinity stand in the center of interest of his work.